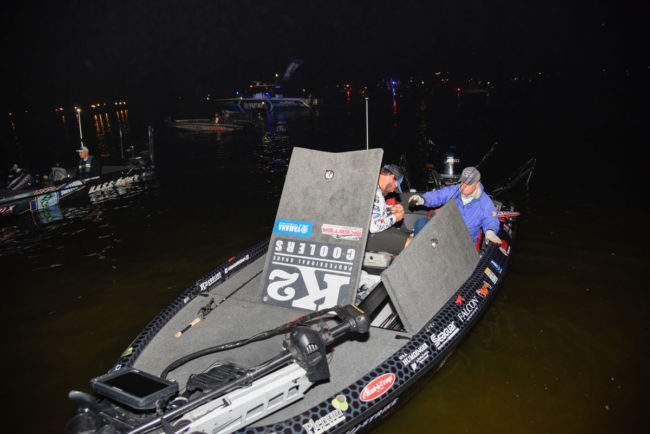 Pierre Part’s Cliff Crochet said the Bassmaster Classic means immortality for the winner and a check for 51 other anglers.

Crochet and fellow Louisianan, Gonzales’ Ryan Lavigne, will have to chase immortality at least one more year as neither caught the fish needed to erase the 12-plus pound deficit for both heading into Sunday’s third and final day of the 47th Bassmaster Classic at Lake Conroe north of Houston.

Crochet needed to follow his three bass, 9-pound 2-ounce Day 2 with a stringer at least twice that size on Day 3 to have a chance to win. But, he weighed in a near-identical three-fish, 9-0 stringer Sunday. He finished with 11 bass weighing 39-10.

Crochet said he caught a 4-pounder early on the same frog pattern that had him in third-place after Day 1. Two more “big ones” hit the frog before the sun peaked through the clouds late Sunday morning but failed to hook either.

“The thing that frustrates me is that after the first day I didn’t catch a meaningful fish after noon the next two days,” he said.

Lavigne said he was fishing Sunday for five big bites. He only got two for 11-12, however, giving him a final weight of 41-9. He focused on brush piles in 8-10 feet of water with a Strike King 5XD crankbait and said he targeted about 80 isolated areas across the south end of the lake.

“I caught probably 30 today. I caught them just about everywhere I went,” he said. “The two I weighed were both pre-spawn, beautiful fish. Usually a brush deal in this place means they’re all giant. For some reason today there were a bunch of small pre-spawners. It’s just a one fish, one spot deal here. You pull up on a brush pile you catch one. They’re going to bite in the first five casts or they’re not going to bite. ”

Gonzales’ Greg Hackney, who missed the final-day cut by 3 pounds, said he fished the shallow, willow-sprig flats Friday and Saturday as Ehrler, Kennedy and 6th-place finisher Michael Iaconelli but just couldn’t dial in exactly what the pre-spawn and spawning bass wanted.

Crochet said he was tempted to join Hackney, Ehrler and others in the area he nicknamed “the jungle” but he shied away because the competitors seemed ganged up there.

“I was in there and they had like six boats in there in practice,” he said. “It’s a big area but — I don’t know if it’s the Louisiana in me makes me feel like I got to be away from people to catch them. I’ve had a lot of success doing that, and I’ve been burned by it a time or two.”

Lavigne said his first Classic experience was overwhelming and “awesome” but Sunday left him wanting more. He plans to try to qualify for the 2018 Classic by again winning a B.A.S.S. Nation championship or an open tournament.

“The only thing I know is that I’ll work harder to get back,” he said. “I don’t like weighing in two. I like weighing in five a day. So, I got to get today back some kind of wa,y and the only way to do it is to come back.”

Crochet can earn his way into the 2018 Classic at Lake Hartwell in South Carolina with a top-35 finish in the Bassmaster Elite Series Angler of the Year standings.

The next Elite Series Tournament is April 6-9 at Toledo Bend.

“I was relevant in the Classic, and that’s a big deal to me,” Crochet said. “There’s always room to improve. I think I need to a better fisherman. As much as it hurts to say it, the black cloud over me is I need to get a little more versatile, but still stay true to what I’m good at. Just got to get better.”

BY CHRIS MACALUSO Special to The Advocate